First Identified Comet To Visit Our Solar System From Another Star 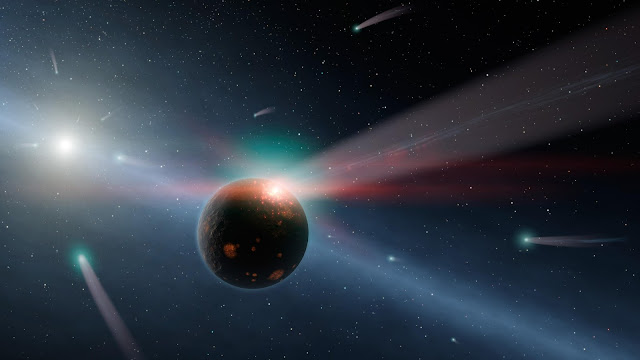 When astronomers see something in the universe that seems unique at first glance, it has to get a lot of excitement and attention. Enter comet 2I / Borisov. This mysterious visitor from the deep of space is the first identified comet to arrive here from another star. We don't know where or when the comet is heading for our sun, but it won't hang around for long. The sun's gravity deflects its trajectory slightly, but cannot capture it due to its orbit and high speed of around 160,000 km / h.

Telescopes around the world have watched the fleeting visitor. The Hubble Space Telescope from NASA produced the sharpest images when the comet was orbited by our sun. Since October, the space telescope has been following the comet like a sports photographer for horses racing on a racetrack. Hubble revealed that the heart of the comet, a loose accumulation of ice and dust particles, is probably no more than 3,200 feet across nine soccer fields. Comet Borisov is the first of its kind, but there are undoubtedly many other comet vagabonds that fill the space between the stars. Astronomers will eagerly look for the next mysterious visitor from afar.

These two images taken by Hubble capture comet 2I / Borisov, which roams our solar system and is on its way back into interstellar space. It is only the second interstellar object known to have passed the solar system.

The comet appears in front of a distant background spiral galaxy (2MASX J10500165-0152029). The bright central nucleus of the galaxy is smeared in the picture because Hubble has been following the comet. The comet Borisov was approximately 203 million miles from Earth during this exposure. The tail of the expelled dust strips off to the top right. The comet has been artificially colored blue to detect fine details in the halo of dust or coma that surrounds the central core. It also helps to visually separate the comet from the background galaxy.

Hubble revisited the comet shortly after its closest approach to the sun, where it received maximum warmth after spending most of its life in the cold interstellar space. The comet also reached a breathtaking top speed of approximately 100,000 miles per hour. The comet Borisov is 185 million miles from Earth in this photo, near the inner edge of the asteroid belt, but below it. The core, an accumulation of ice and dust, is still too small to dissolve. The bright middle part is a coma of dust that leaves the surface. The comet will be closest to Earth at the end of December, 180 million miles away.

"Hubble gives us the best cap on the size of Borisov's comet nucleus, which is the really important part of the comet," said David Jewitt, professor of planetology and astronomy at UCLA, whose team has won the best and sharpest look, confirmed this first interstellar comet. "Surprisingly, our Hubble images show that its core is more than 15 times smaller than expected in previous studies. Our Hubble images show that the radius is less than half a kilometer. Knowing the size is potentially useful to estimate how often it occurs. " Such objects may be in the solar system and in our galaxy. Borisov is the first known interstellar comet, and we would like to know how many others there are. "

Crimea amateur astronomer Gennady Borisov discovered the comet on August 30, 2019, and reported the position measurements to the Minor Planet Center of the International Astronomical Union in Cambridge, Massachusetts. The Center for Near-Earth Object Studies at NASA's Jet Propulsion Laboratory in Pasadena, California, in collaboration with the Minor Planet Center, calculated an orbit for the comet to indicate that it originated from another location in our Milky Way galaxy is unknown.

Nevertheless, observations with numerous telescopes show that the chemical composition of the comet is similar to the comets in our solar system, which suggests that comets also form around other stars. By mid-2020, the comet will have zoomed 500 million miles from Jupiter on its way back to the frozen abyss of interstellar space.

Materials provided by NASA/Goddard Space Flight Center. Note: Content may be edited for style and length.