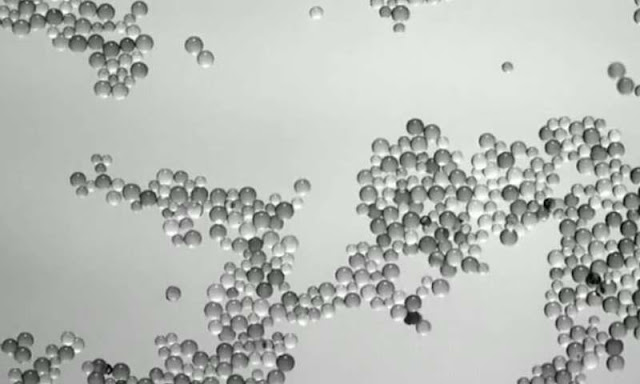 A team of mathematicians from the University of North Carolina at Chapel Hill and Brown University have discovered a new phenomenon that generates a fluid force capable of moving and binding particles immersed in fluids with dense layers. The breakthrough offers an alternative to the previously accepted assumptions about how particles accumulate in lakes and oceans and could lead to applications in locating biological hot spots, cleaning up the environment and even sorting and recycling. 'packaging.

The way in which matter is deposited and aggregated under the effect of gravitation in fluid systems, such as lakes and oceans, is a large and important field of scientific study, which has a considerable impact on the humanity and the planet. Consider "sea snow," the rain of organic matter that constantly falls from the upper waters to the deep ocean. Not only is nutrient-rich sea snow essential to the global food chain, but its accumulations in brackish depths represent the largest carbon sink on Earth and one of the least understood components of the planet's carbon cycle . There is also the growing concern about microplastics swirling in oceanic eddies.

The accumulation of oceanic particles has long been considered the result of collisions and chance adhesions. But an entirely different and unexpected phenomenon is at work in the water column, according to an article published on December 20 in Nature Communications by a team led by Professors Richard McLaughlin and Roberto Camassa of the Carolina Center for Interdisciplinary Applied Mathematics of the College of Arts. & Sciences, with their graduate student UNC-Chapel Hill, Robert Hunt and Dan Harris of the School of Engineering at Brown University.

In the article, the researchers demonstrate that particles suspended in fluids of different densities, such as seawater with varying layers of salinity, exhibit two previously unknown behaviors. First, the particles self-assemble without electrostatic or magnetic attraction or, in the case of microorganisms, without propellants such as flagella or eyelashes. Second, they clump together without the need for adhesive or other bonding forces. The larger the cluster, the stronger the pull.

Like so many discoveries, this one started accidentally a few years ago, during a demonstration for VIPs visiting the mixed laboratory of applied mathematics and marine sciences that Camassa and McLaughlin lead. The pair, long fascinated by layered fluids, aimed to show off a favorite salon tip: how spheres spilled into a saltwater tank will "bounce" on their way to the bottom, as long as the fluid is uniformly stratified by density . But the graduate student in charge of the experiment made a mistake in setting up the density of the lower fluid. The spheres rebounded and then hung there, submerged but not sinking to the bottom.

"And then I made a good decision," said McLaughlin, "not to clean up the mess." Go home, he said to the graduate student. We will come back to this later. The next morning, the balls were still hanging, but they had started to regroup - to self-assemble for no apparent reason.

The researchers finally discovered the reason, although it took more than two years of benchmark experimental study and a lot of math.

You can see the phenomenon at work in a video produced by the researchers. Plastic microbeads dropped into a container of salt water topped with less dense fresh water are dragged down by the force of gravity and pushed up by buoyancy. When suspended, the interaction between buoyancy and diffusion - acting to balance the salt concentration gradient - creates flows around the microbeads, causing them to move slowly. Rather than moving randomly, however, they clump together, solving their own puzzles. As the clusters develop, the fluid force increases.

"It's almost as if we have discovered a new effective force," said Camassa.

The discovery of this previously unknown first principle mechanism opens the doors to understanding the organization of matter in the environment. In highly stratified bodies of water, such as estuaries and the deep ocean, being able to understand the phenomenon mathematically can allow scientists to model and predict the location of biological hotspots, including areas of feeding of commercial fish or endangered species. Harnessing the power of the phenomenon could also lead to better ways to locate ocean microplastics or even oil from deep-sea oil spills. Or, in an industrial-scale version of the Fluids Lab experiment, the mechanism could be used to sort materials of different densities, for example different colors of crushed recycled glass.

"We have been working with layered systems for years, usually looking at how things go through them," said McLaughlin. "It is one of the most exciting things I have encountered in my career."