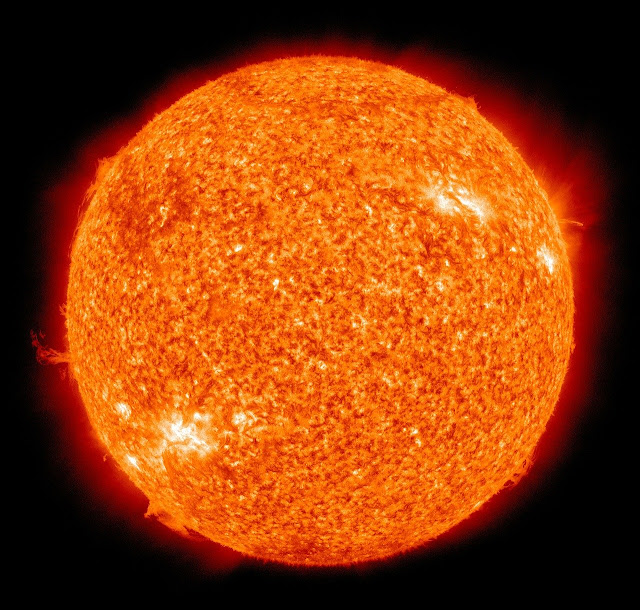 A scientist from Queen's University in Belfast has led an international team to the pioneering discovery of why the sun's magnetic waves get stronger and stronger as they emerge from their surface. This could help solve the mystery of how the sun's corona maintains its diverse properties. Million degrees of temperature.

For more than 60 years, observations of the sun have shown that the magnetic waves increase in strength when they leave the interior of the sun. So far, however, there has been no solid evidence to support why this was the case.

The high temperatures of the crown have always been a mystery. We usually feel warmer the closer we are to a heat source. However, this is the opposite of what appears to be happening on the sun - its outer layers are warmer than the heat source on its surface.

Scientists have long accepted that magnetic waves direct energy from the sun's huge internal energy storage, which is powered by nuclear fusion, to the outer regions of its atmosphere. It is therefore extremely important for researchers to understand how wave motion is generated and spread in the sun.

The experts formed a consortium called "Waves in the Lower Sun's Atmosphere (WaLSA)" to conduct the studies and used high-resolution observations from the National Science Foundation's New Mexico Dunn Solar Telescope to study the waves.

Dr. David Jess from the Faculty of Mathematics and Physics at Queen led the team of experts. He explains: "This new understanding of wave motion can help scientists find the missing piece of the puzzle of why the outer layers of the sun are hotter than their surface, even though they are further away from the heat source.

"By dividing sunlight into its primary colors, we were able to study the behavior of certain elements of the periodic table in its atmosphere, including silicon (which was formed near the surface of the sun), calcium and helium (which was formed in the chromosphere). Wave amplification is most evident ).

"The variations in the elements made it possible to uncover the speed of the solar plasma. The time scales in which they developed were measured, which allowed the wave frequencies of the sun to be recorded. This is similar to the deconstruction of a complex musical ensemble of fundamental tones and frequencies by visualizing the score . "

The team then used supercomputers to analyze the data through simulations. They found that the wave amplification process can be attributed to the formation of an "acoustic resonator", in which significant temperature changes between the surface of the sun and its outer corona create boundaries that partially reflect and catch the waves, intensifying and dramatically gaining strength ,

The experts also found that the thickness of the resonance cavity - the distance between the significant temperature changes - is one of the main factors that determine the properties of the detected wave motion.

Dr. Jess comments: "The effect we have found through research is similar to how an acoustic guitar changes the sound it emits through the shape of its hollow body. If we think of this analogy, we can see how the waves in the Sun can be caught growing and changing when they leave their surface and move to the outer layers and outwards. "

Dr. Ben Snow of the University of Exeter and co-author of the study said: "This new research opens the door to a new understanding of the mystery surrounding the sun's magnetic waves. This is a crucial step in explaining the coronal heating problem - where the temperature is a few thousand Kilometers from the surface - is hotter than the heat source itself. "

The global physics community is currently planning to conduct further studies with the latest generation of solar telescopes that will be available in the coming years. This includes the upcoming Daniel K. Inouye Solar Telescope, a $ 300 million observatory that is currently nearing completion in Hawaii.