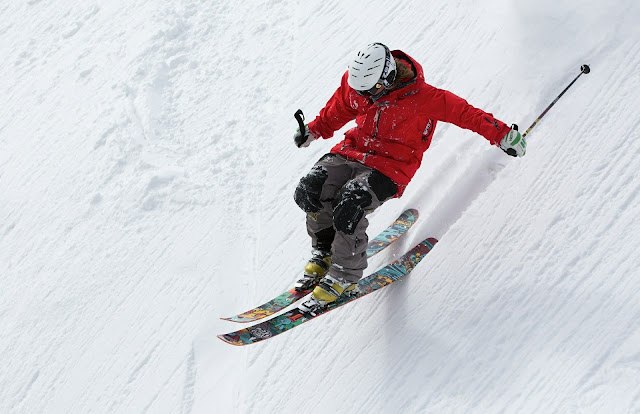 Kinematics is the part of mechanics that describes the movement of particles, objects or groups of objects. In these pages, we will analyze the movement of a point particle describing any trajectory such as that represented in black in the following figure. To simplify, we have represented a trajectory in a plane, but this same trajectory could be three-dimensional. 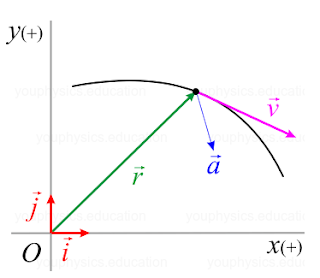 In the previous figure, we have also represented a reference frame at rest in which the observer O is at the origin of Cartesian axes. This repository is called inertial (or Galilean) . The positive direction of the three cartesian axes is indicated respectively by the unit vectors i , j and k . We will describe the movement of the particle with respect to this reference frame.

The motion of a particle is described by three vectors: position , velocity and acceleration .

The position vector (shown in green in the figure) goes from the origin of the reference frame to the position of the particle. In Cartesian components, it is given by:

The components of the position vector are time-dependent because the particle is moving. In order to simplify the notation, we will often omit this dependency in the expressions of the vectors.

The velocity vector is the derivative of the position vector with respect to time:

Which can also be expressed in the following form:

The velocity vector is always tangent to the trajectory of the particle at every point of it .

The acceleration vector is the derivative of the velocity vector:

Which can also be expressed in the following form:

The acceleration vector is the variation of the velocity vector over time. Therefore, it must always point inward of the path of the particle, as shown in the figure.

In these pages, you will find many problems where you will learn to calculate these three vectors in different situations.

The acceleration vector can be expressed as a function of its projections in a frame that moves with the particle and whose axes are respectively tangent and perpendicular (or normal) to the trajectory of the latter at each point. These projections are called intrinsic components of the acceleration . 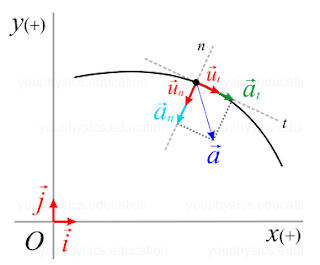 The figure above shows that the acceleration vector can be expressed by the sum of its intrinsic components, called respectively tangential acceleration and normal (or centripetal) acceleration :

The tangential acceleration is given by:

Where ut is a unit vector tangent to the trajectory at each point determined by dividing the velocity vector by its norm:

Tangential acceleration provides information on the variation of the velocity vector norm.

On the other hand, the normal (or centripetal) acceleration is given by:

In the particular case of a circular trajectory, the norm of the normal acceleration is: